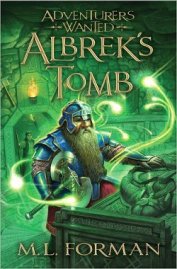 Two thousand years ago, the dwarf Albrek went looking for new mines in the land of Thraxon in the hopes of becoming rich. No one knows if he ever succeeded, though, as all trace of Albrek and his followers simply vanished from history. Now, however, the dwarves must find the magical talisman that Albrek carried with him before their mines run dry, which would threaten the livelihood of the entire dwarf realm. And so the newly named wizard Alexander Taylor joins a familiar company of adventurers on a quest to discover what happened to Albrek, find his mythical tomb, and locate the lost talisman. Discovering Albrek s fate, however, may be the least of the adventurers problems when they cross paths with an ancient, wandering paladin who has a taste for confrontation and a paranoid belief that some great evil is working in all of the known lands. Alex and his friends must travel through the shadow of an empty oracle s tower, where a whispered legend is about to come true, and strike out for the distant parts of Thraxon that are only spoken of in old tales and half-forgotten myths. Join Alex and his brave companions on an adventure that will test their courage beyond their limits.
Читать О книге The Horn of Moran

Sixteen-year-old wizard-in-training Alex Taylor and his band of fellow adventurers battle a goblin army, navigate an enchanted forest, and try to solve the sphinx's riddle in their quest to find the lost Horn of Moran and return it to Norsland before the nation erupts in war.
Читать О книге 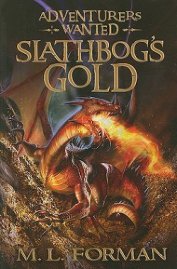 Do you have the courage, the wits, and the skill to claim a dragon's hoard? If so, apply within ...The sign is small, tucked into the corner of Mr. Clutter's bookshop window: "Adventurers Wanted. Apply Within." No one but fifteen-year-old Alex Taylor even seems to notice it is there. And for Alex, who has wished for a change in his life, it is an irresistible invitation.Upon entering Mr. Clutter's shop, Alex is swept away on an incredible adventure to a faraway land filled with heroic warriors, mysterious elves, and hard-working dwarves.Alex becomes the eigth man in a band of adventurers seeking the lair of Slathbog the Red - and evil dragon with a legendary treasure. Along the way, Alex and his new friends must battle dangerous trolls and bandits, face undead wraiths, and seek the wisdom of the Oracle in her White Tower.Alex's adventure takes him to distant and exotic lands where he learns about courage, integrity, honor, and, most importantly, friendship.Slathbog's Gold is the first book in an exciting new YA epic fantasy series and heralds the arrival of a major new talent in the genre.
Читать О книге
×